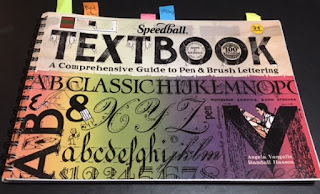 Angie Vangalis with the Texas Lettering Arts Council will present the November program on the Centennial Edition of the Speedball Textbook which was published in 2015. The textbook was originally created to introduce the newly invented Speedball pen in 1915. The Speedball Textbook is unique in its prominence, distribution, and popularity; artists in many diverse fields routinely credit it as their "first lettering book.” Angie has directed two international calligraphy conferences in Dallas (2005 and 2014) and is currently an organizer of several calligraphy events. She will bring extra copies if you wish to purchase a signed one from her.

Welcome to the Waco Calligraphy Guild!

The Waco Calligraphy Guild is a non-profit organization in Waco, TX dedicated to the advancement and promotion of calligraphy as an art form.

All levels of interest are invited to attend, from beginner to advanced, or those who just appreciate beautiful lettering.

All meetings are held on the second Saturday of each month from 10 am to 12 pm.

Our normal meeting place is:
St. Matthew Lutheran Church
800 N. New Road
Waco, Texas 76710
Please ring the bell at either door if the door is locked. There is handicapped accessible parking in the back of the church.